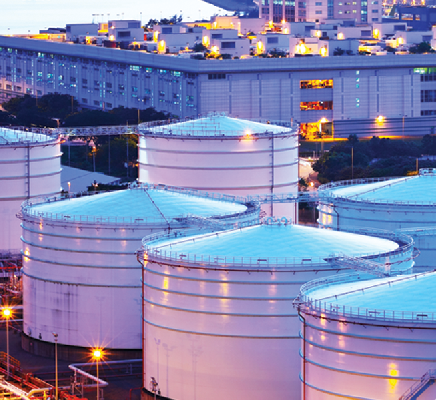 Storage tanks used for product storage in industrial facilities are subject to soil-side corrosion during operation, especially when installed in severe environments. Soil-side corrosion is perceived to be a principal cause of storage tank failure and imposes a major environmental and operational challenge worldwide. With thousands of Aboveground Storage Tanks (ASTs) installed, the MENA (Middle East & North Africa) region is not an exception. Ingress of chlorides and other corrosive species from the native soil and groundwater through the tank pad, along with the presence of bacteria such as SRB, are believed to be the main causes for soil-side corrosion. Airborne chlorides and moisture can seep into the under-tank environment through the chime area, causing annular plates to corrode.

Several techniques have been adopted to mitigate soil-side corrosion of AST floors, such as bituminous/oily sand, Cathodic Protection (CP) systems, and coatings. However, total effectiveness of these techniques, standalone or combined, has been questionable in providing the required protection. The bituminous layer hardens and cracks as it ages, creating a corrosive environment that traps moisture and corrosive species between the underside of the tank floor and the construction pad. It has also been shown that this layer when combined with CP shields the cathodic current and renders the CP system ineffective, at least partially. The presence of inevitable air gaps below the AST prevents the tank floor from being in direct contact with the sand (electrolyte), consequently blocking CP current at such locations and preventing uniform CP distribution on the underside surface of the tank bottom.

There is a growing industrial awareness about the advantage of introducing amine carboxylate Vapor phase Corrosion Inhibitors (VpCIs) into the tank pad, which makes Cortec’s CorroLogic® a logical answer to the aforementioned challenges. The unique ability of CorroLogic® VpCIs to protect areas that cannot be reached by traditional Cathodic Protection makes it an ideal treatment to be used in conjunction with CP or by itself when CP is deficient or absent. Utilizing the power of Cortec’s VpCIs, CorroLogic® is able to vaporize and disperse through open areas below an AST. When the VpCIs reach a metal surface, they adsorb and form a protective molecular barrier to guard against corrosion, providing an added dimension of protection to under-tank areas that cannot be reached by CP.

CorroLogic® can be added to an AST in several different forms, enabling application during the construction of new tanks or while existing tanks are in-service or out of service. During construction, CorroLogic® pouches can be placed on an AST’s high-density polyethene (HDPE) liner and left to emit VpCIs below the tank surface. If an AST is already in service and needs protection, a CorroLogic® Slurry is injected beneath the tank floor through the existing monitoring or leakage detection pipes or through injection pipes post-installed through the concrete ring beam. When a tank is out of service for T&I, CorroLogic® Powder is fogged through the tank floor into the under-tank area and allowed to diffuse.

Since the successful implementation of CorroLogic® in the Middle East in 2011 on a 107-meter crude oil tank at a major oil and gas facility in the Arabian Peninsula, Cortec® Middle East has been researching and successfully applying CorroLogic® AST solutions in the various petrochemical, water-power, and oil and gas sectors across the GCC countries.

Cortec® Middle East continues to do research to evaluate the effective use of CorroLogic® in conjunction with CP. Khalil Abed presented some of this research in a paper he shared at the NACE 2016 Conference and Expo earlier this year.* It was concluded that CorroLogic® VpCI® alone has the ability to reduce the corrosion rate significantly, which makes it a viable solution to protect against soil-side corrosion, especially for tanks with no CP system or with a deficient one. The paper also showed that combining CorroLogic® VpCI® with Impressed Current Cathodic Protection (ICCP) showed a synergistic effect and helped reduce the corrosion rate further, keeping it well below 0.5 mpy.