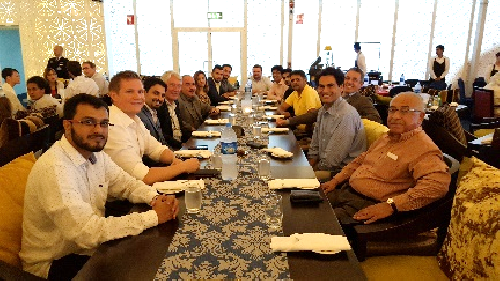 Cortec Middle East was pleased to welcome Boris Miksic, President of Cortec Corp. to sunny and hot Dubai in June where he shared some of the challenges and triumphs of his journey along with his vision for the region.

During his visit, Boris spent time at Cortec Middle East’s research and testing facility at the American University Dubai, distribution and warehouse capabilities for the region and participate in an open forum on the future growth of the Middle East for Cortec.

Usama Jacir, Cortec Middle East General Manager organized a guided tour of Dubai with the MCI team from the sky! Much of Dubai’s skyline has extended service life thanks to MCI-2005 being used within the raft and foundations of many buildings across the UAE.

After the exciting helicopter tour, Boris concluded his stay by joining the team for a sociable evening at Atlantis The Palm for “Iftar” and was introduced to a delightful fusion of Middle Eastern, Khaleeji and Indian cuisine.